Indulge me, and let me tell you about Venice. 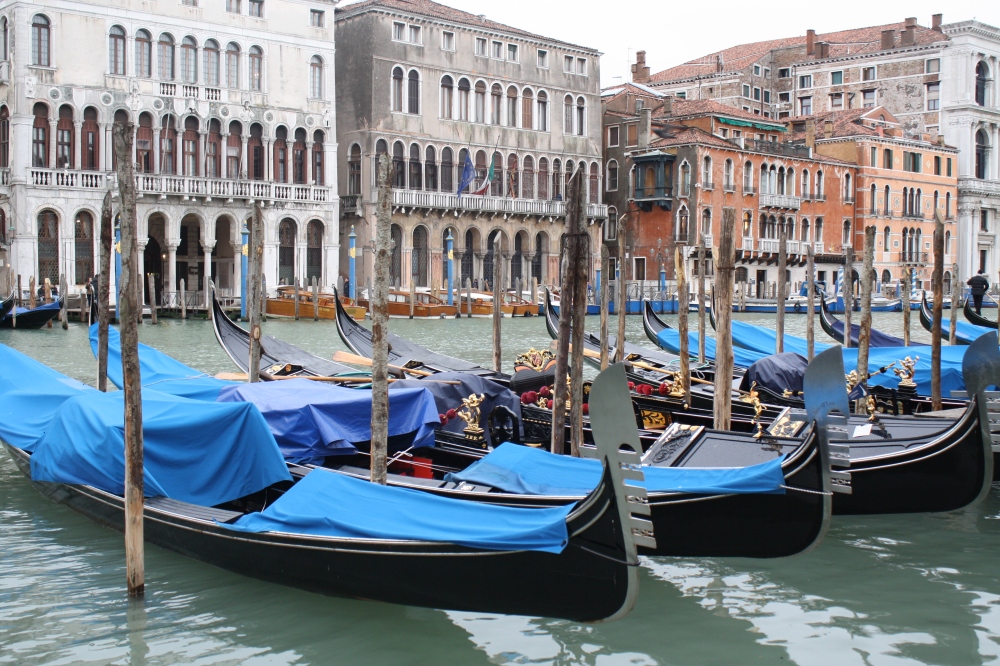 Among the best things about Venice are of course its nautical history and culture and the constant sound and sparkle of the water. Our first experience of getting out on the water was actually our airport transfer, which I had booked with VeniceLink. We started our holiday by lurching along in a James Bond-style speed boat, making the transfers a highlight of the whole holiday! Whilst these shared water taxis are not the cheapest means of getting from a to b, it was good to know that we could get straight to our hotel when we arrived late at night and straight to the airport when we had to leave early in the morning. 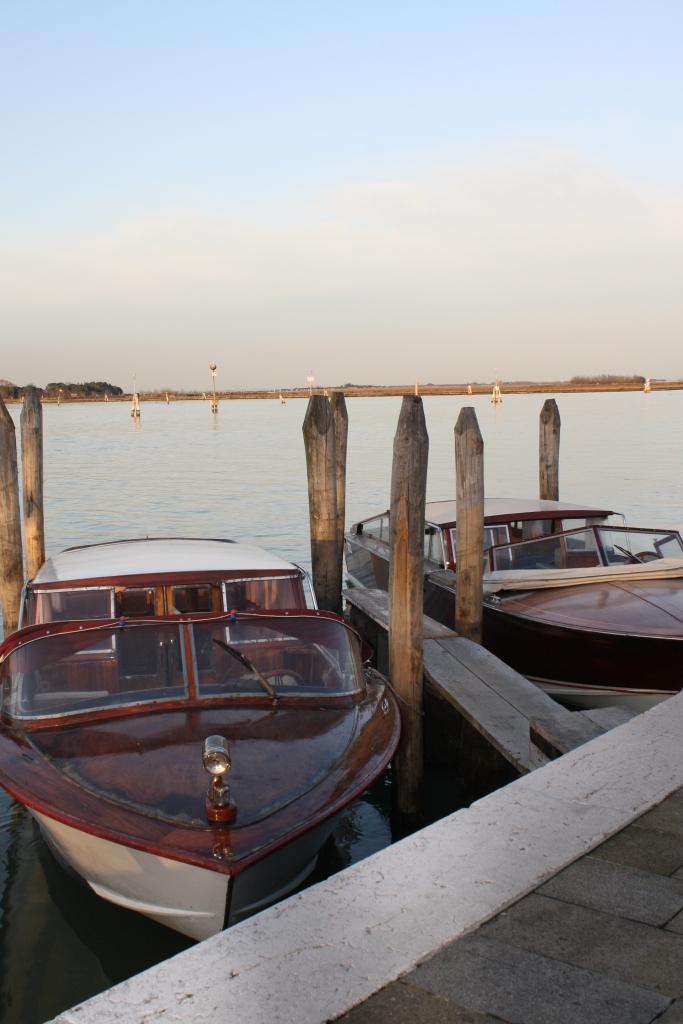 Interestingly, the Doge’s Palace wasn’t our cup of tea, being focused largely on politics, power and a huge collection of weapons, but in the Museo Correr across St Mark’s Square we discovered beautiful maps and globes, which really gave us a feel for the city’s maritime heritage. There were also some evocative paintings and sculptures there, and the decor was light and luxuriant in contrast to the dark courtrooms of the Doge’s Palace.

Another nautical highlight was a boat trip to some of the lagoon islands. We found it so tranquil out on the open water, where some of the bustle of central Venice gives way. There were a lot of interesting birds, as the marshlands make a perfect habitat for them.

Murano was the first island we visited, though we really only saw one factory. It was amazing to see the glassblowing demonstration, when a non-descript looking middle-aged man conjured a beautiful horse in under a minute like the perfect magic trick. While we didn’t buy anything, it was fun looking at all the items on display. Rather than the tiny, crowded shops and stalls of the city, this was a calm, spacious exhibition of true craftsmanship. While we were waiting to re-board the boat, some of us noticed that the pebbly beach was scattered with scrap glass, smoothed by the water. We collected them as if they were treasure.

Back on the boat, the late afternoon light made reflections of the markers and cormorants skimmed across the water. To one side of us the Dolomites rose into the clear sky, lifting our eyes well away from the factories that can hinder the views from some directions.

Torcello, the next island we came to, was a haven, benefiting curiously from a certain element of neglect and a lack of habitation. Whilst the church there is said to be well worth a visit, we didn’t make it that far, as we came to a cafe with two of the things that I had earlier bemoaned Venice’s lack of: a garden and deckchairs. Sitting on a deck chair in the evening sun with a sugary crepe, watching birds, goats and children, was exactly what we needed at that point.

Burano was the third and final island of the trip, and you cannot visit that place without feeling a little, well, brighter. This is the island of the colourful houses, more blue canals, fishing and lace making. It felt to me something like the Caribbean meets Cornwall. We caught Burano just before sunset so the reflections were beautiful and the streets uncrowded. The shops in Burano have a sense of quality and charm, selling hand-made items.

There are other ways to visit the islands, for example using some of the Vaporetto routes or buying tickets for a hop on, hop off trip which gives you more freedom to choose how long you spend at each place, but we found that this trip on the ‘Serenissima’ suited us well and was good value at 20 euros each.

Given Venice’s history, I was expecting a city throbbing with music. I thought that, as in Rome, we might walk into churches to find music playing, or like in Paris come across a musician or two on the street corners. I even thought that it may bear resemblance to the evening musicality of Dublin, with players featuring in restaurants and bars. Whilst there is beautiful music available in Venice, it definitely requires you to actively seek it out, and to pay for the privilege. If you can do that, though, it will be without a doubt one of the highlights of your trip. We went to a string concert at San Vidal church and it was spell-binding. The musicians were extremely skilled and accomplished and managed to capture all the light and shade of each piece perfectly. The church was the perfect setting for the performance, giving it a sense of context within the traditions of Italian composers like Vivaldi and violin-makers like Stradivari. It was the lightest church we visited, with some up-lit works of art, pale stone and simple flowers. It felt very inviting as we walked in from the dark and rain outside. 28 euros each felt like a very reasonable price for such a memorable experience. The same organisation have also put on an exhibition of instruments, some dating back centuries, in another church, which is also well worth a visit (and free!).

One expectation I had – perhaps gleaned from all the serene canal pictures on Pinterest – was that Venice would be a very leisurely, easy-going, even slow-paced city in which to holiday. We had moments of that, for example the string concert and the boat trip and one sunny, warm afternoon when we sat on a bench by the Grand Canal and watched the world go by for a couple of hours. There was also one restaurant in particular – Ristorante Marco Polo(shown in the picture below) – which achieved that perfect combination of attentive service and all the time in the world. However, the city was generally a bustle of fast-moving, picture-clicking, selfie-stick-wielding tourists. Italian coffee culture, in which one generally drinks it standing, usually pretty quickly, did not suit the Brit in me who regularly needs to sit down, drink tea and take stock of the day so far. However we did gradually find ways to cultivate those rest-moments in amongst the rush of dodging in and out of lanes and taking in the sights. One habit we fell into was buying simple ‘street food’ from bakeries: small pizzas covered in artichokes, arrancini (risotto balls) and fresh bread are just some of the delicacies on offer, usually at under five euros. We would then sit on the platforms around St Mark’s Square, or on benches by the canal to eat them. There are also some cafes, particularly in the Cannaregio area, where it is much easier to sit for a drink. I had a delicious hot chocolate there one morning, made in the true European way of melting chocolate into cream.

We packed in most of Venice’s main sights and museums, but the activities we would most recommend are:

*Get the lift up the Campanile (in St Mark’s Square) on a clear day and look out across the city towards the Dolomites or the Lagoon. 9 Euros each. Get there early to avoid long queues. 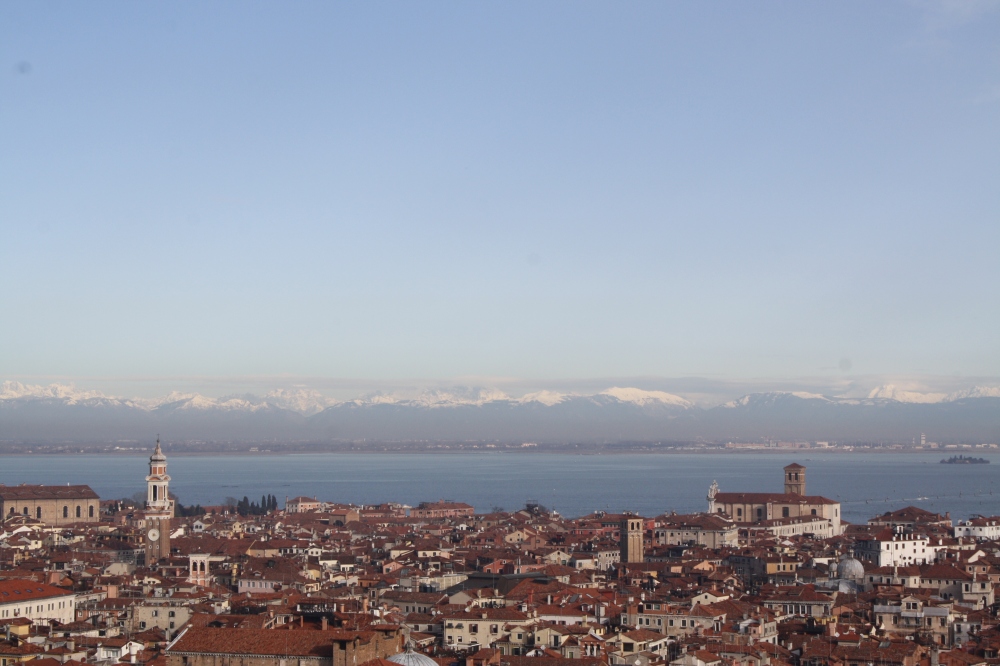 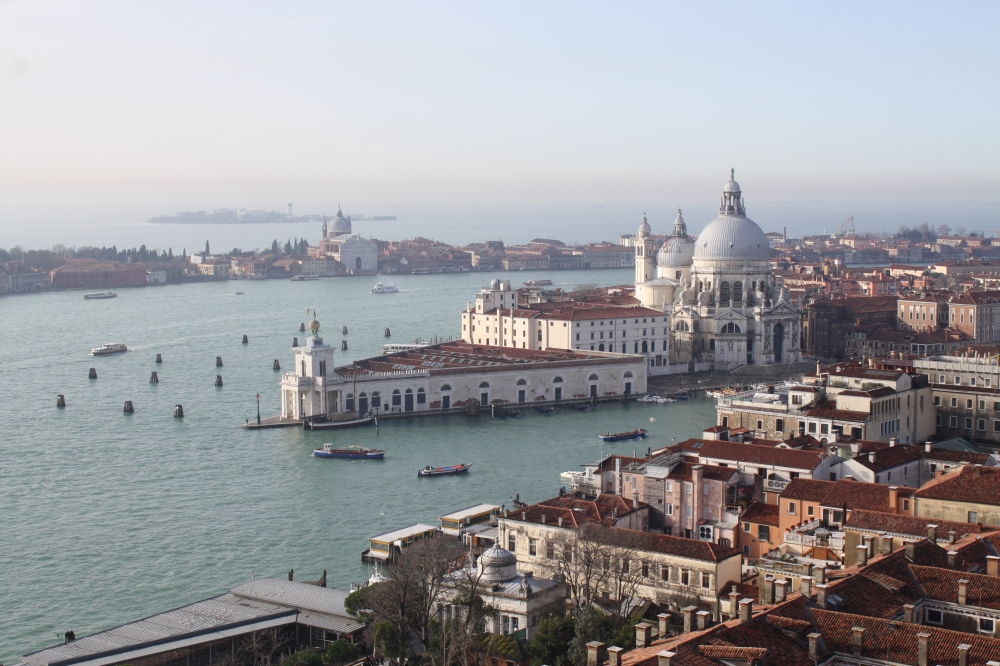 *Take a boat to the Lagoon Islands, especially Burano and Torcello. Our trip was 20 euros each and you can book them down at St Mark’s or in most hotels.

*Visit the Museo Correr, which joins on to the the Museo Archeologico and part of the Library. You can buy a ticket for the three plus the Doge’s Palace.

*Eat at Barbanera, which is packed with Italians, has a good atmosphere and serves good food, or at Ristorante Marco Polo, which has a good selection of wines, delicious food and attentive, unrushed service. Both are fairly near to St Mark’s Square. 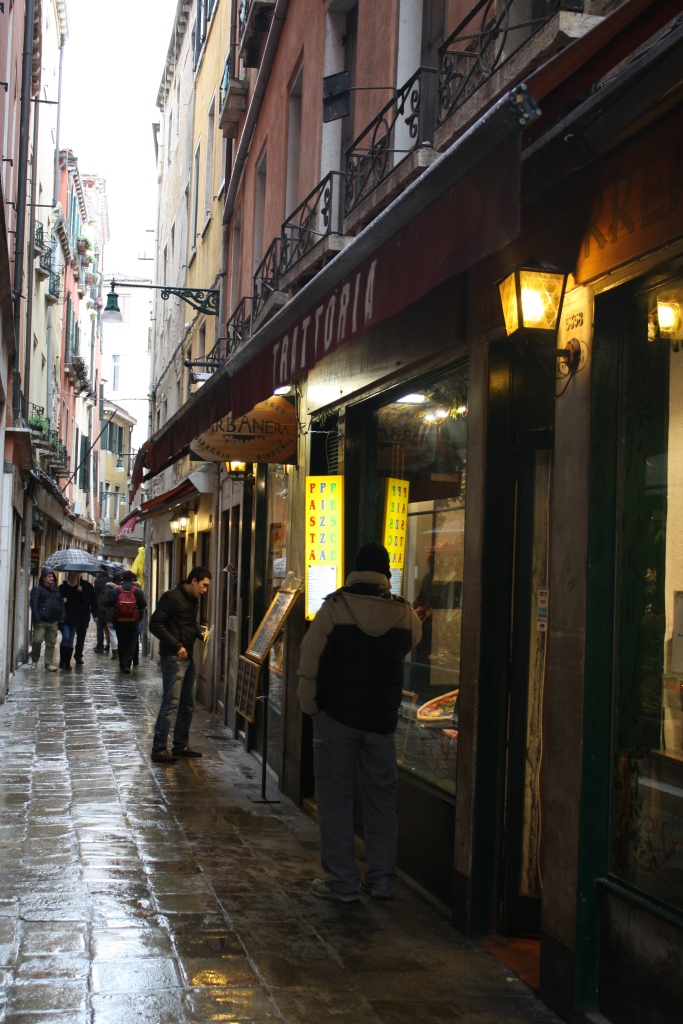 *Take a water taxi (speed boat). The cheapest way to do this is through Venice Link for your airport transfers.

*Take in a string concert. Ours cost 28 euros each and we were able to book it at our hotel.

*If you’re staying in self catering, the food market near Rialto is full of fresh vegetables and seafood.

And that concludes our little jaunt through Venice! I hope you enjoyed it as much as I did 🙂