Most weeks I post a list of ‘small things’ that have made me happy. This week was the week of my 27th birthday, and for a change I thought I’d sum up my goings on in three words…

On Saturday evening, we held an event that was basically dreamed up and organised by a 13 year old member of my youth group, with a little help from me, a few other adults and some of the other young people in the group. We were trying to raise awareness of the issues around people trafficking and forced labour, of the inspiring work of charities Stop the Traffik and International Justice Mission, and of the impact that buying Fair Trade can have on people around the world. Though the issues are tough and shocking, hearing 13 year old Carys use her voice to stand up for people across the globe was an incredibly moving and hopeful occasion. It was also great to see the other members of the youth group support her in doing so – they performed a street dance to this song, 27 Million, some of them sang and played music, others helped serve drinks and food or manned stalls. We were also joined by the lovely Claire, a friend of my sister’s, who sung so beautifully, and Lianna Clarke, from International Justice Mission, who spoke to us about their transformative work around the world, and of the charity’s aim to ‘show that hope for the poor is possible’. The whole event radiated this hopefulness, as people used their gifts, compassion, time and money to face up to global injustices and to try to do something about them.

I’ve also been thinking about hopefulness on a personal level. Sometimes it is really hard to keep a hopeful mindset for our own lives – especially when we’ve experienced disappointment, been treated unfairly, or feel worn down by life’s pressures. It can be easier to develop bitterness, almost without realising it, and in many cases nobody would blame us for this – but the thing about bitterness is that it keeps us captive, makes us feel increasingly alone and misunderstood and disables us from living life to the full. Hopefulness is so much better, a wonderful quality, and allows us to continue to seek our dreams and to bring positivity to others…

I’ve had a couple of disappointments this week: the monthly sadness of still not having conceived after what feels like so long, and having to stop my violin lessons because of all the time pressures I’ve got at the moment. Both these things involve so much hoping, dreaming and longing, so to give them up again feels very painful.

It’s hard when you are repeatedly disappointed to keep returning to hope. The Bible says ‘hope deferred makes the heart sick, but a dream fulfilled is a tree of life’. Both halves of the sentence are so true: being let down, or not getting what we longed for, makes our hearts hurt and ache – but hope is also the key to life, and because of this seems to me to be worthwhile. Perhaps returning to hope instead of clinging to bitterness is the key to healing our hearts and experiencing life to the full, even though it leaves us vulnerable to further pain. Perhaps it is worth the risk. I’m drafting a book on hopes and dreams at the moment, so any thoughts will be very welcome!

It has been so nice spending time with my friends and family this week. On Monday we paid another visit to Chinatown, and on Friday we had a second Chinese Feast and watched Tangled. I really enjoyed watching a Disney again, despite most of the songs being pretty much the same as songs from other Disney films, and the female role models being a little stereotypical… It turned out that the theme of the film is about dreams coming true, so it was very apt bearing in mind the thoughts I shared above. On Saturday we had a tea party and a friend of mine came and did hair, make-up and nails for some of us girls before we headed out to the charity event in the evening. My friend Toni is staying too, and we’ve had a little pray together, and she has patiently listened to my moaning! And my sister as usual, has been the helpfullest sister of them all 🙂 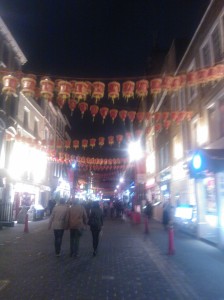 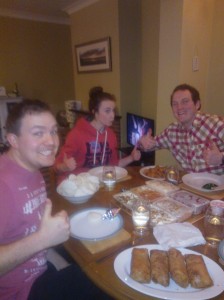 Finding people, things and experiences that inspire us is so important in keeping us passionate about life. This week I’ve been inspired by:

*All the people mentioned above