Did you ever have those moments as a child when you would get so upset about something that you would be inconsolable for a while? Refusing to be hugged, refusing to be talked out of your tantrum, refusing to calm down? I did, but like most children, I would always eventually ‘break’. Whether someone made me laugh or something caught my attention, eventually my cries would fade and I’d be calm again. Often I would simply give in to the hug offered to me or the gentle teasing and coaxing of a parent or loved one.

I often still feel like this with my Father God. I see or feel an injustice, or situations start to build up on me, and my heart closes to his gentle love. My attitude becomes cross and rebellious. My soul screams ‘No!’ like a toddler. I refuse to be consoled about whatever has so dismayed me.

Eventually, though, He always wins me around, as only a loving Father can. I know arms of grace are there for me and I gradually unfold into them, letting my emotion tumble out and then allowing my soul to still in its safe place of surrender.

Time and time again this happens. Sometimes it is when I hear a song that softens my heart, or read something that pierces the wall I’ve built up, speaking straight to the matter in hand. My Father reaches me in all kinds of ways. Strangely, it is in these moments of total vulnerability and surrender that I find my spiritual strength and my faith is affirmed.

This kind of admission – this rather intimate description about an invisible and, some would say, unproven God – this may feel uncomfortable to some readers and I get that. It’s a little strange, perhaps.

Nevertheless, the concept of a loving God who has a personal relationship with people is a strong theme in the Christian Bible and some would say it is the theme of it. For example, there is a famous story that Jesus told about the welcoming embrace that a father lavished on his shame-faced son. The son had taken everything the father could give him, utterly wasted it, and returned seeking a servant’s position, but instead received uncompromised, overwhelming love. The story had a meaning, and it was to do with the Father God and his relationship with people like you and me.

Then there are the prayers of people like David, who often praised God, but also often ranted and raved at Him, asking questions of him and expressing intense emotion, but then always concluding that God was in control. Psalm 3 demonstrates well this open-hearted relationship that David had with his Father. The prayer starts with a call for help, as David exclaims about his ‘many foes’, but he continues with declarations like ‘you, Lord, are a shield to me’ and ‘I will not fear though tens of thousands assail me on every side’, finally concluding that ‘From the Lord comes deliverance’.

We can’t really expect to understand God – if we could that would somehow diminish his godliness, I think. But it seems we can expect to know him. I’m into CS Lewis quotes lately, and I love this one, which I found on Pinterest (below). It makes me hopeful about life and its meaning. 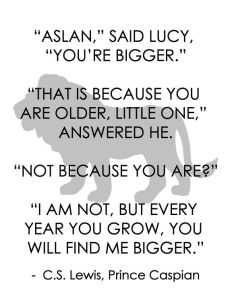 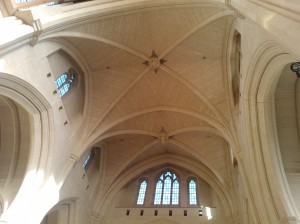 The eternal God is your refuge,  and underneath are the everlasting arms. Deut 33:27